Manage your Bitcoin, Ethereum, USDT, Tether, USDT and over 300 other coins and tokens.

It only takes a few minutes to set up Atomic Wallet on your PC or phone, giving you the perfect place to securely store your Tether USD (alongside other top coins and tokens). 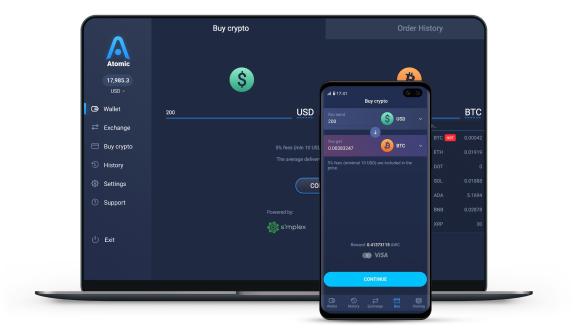 Buy and Swap Straight From Your Tether USD Wallet

You can purchase your USDT and exchange it for other coins straight from your Tether USD wallet on Atomic, which ensures your crypto is securely encrypted and controlled by only you. We work with a licensed EU payment provider to handle the processing.

How to Set Up Your Tether USD Wallet

What You Can Do With Our Tether USD Wallet The blockchain-based cryptocurrency Tether is something of a trailblazer in the financial space, as it was one of the earliest fiat-collateralized stablecoins to be circulated globally.

This description means that Tether (USDT) is pegged to the greenback's value, with the asset initially corresponding on a 1:1 basis with US dollars sitting in bank accounts throughout the world. While it has evolved slightly over time to be backed fully by US currency reserves rather than dollar deposits, its price has continued to hover around the $1 mark through 2020 and the first quarter of 2021.

In this respect, Tether was partially created to reduce the crypto market's inherent volatility and mitigate real-time price risk while maintaining the unique advantage of transacting with other blockchain-based assets.

This was the central premise behind Tether when it launched in July 2014, as founders Reeve Collins, Brock Pierce, and Craig Sellars built upon J.R. Willet's 'Mastercoin' protocol, a new and stabilized currency on top of Bitcoin's existing foundation.

Initially referred to as 'Realcoin' following its launch, the name was officially changed to Tether before the first USDT tokens were released on October 6th, 2014. Since this time, the coin has realized part of its premise by adhering closely to a single USD value, ranging from a low of $0.958938 in November 2018 to a peak of $1.02 in December of the following year.

Interestingly, Tether was also created to respond to the relative lack of convertibility between fiat and cryptocurrencies, with exchanges considered to be the primary users of USDT since the token's inception.

To this end, USDT tokens are primarily issued on both Ethereum and Bitcoin networks. Tether coins are represented as ERC-20 tokens on the former, for example, while utilizing the Omni-layer to ensure compatibility with Bitcoin. This version of Tether is called USDT Omni. Tether has also aimed to drive greater transparency, although it has continued to achieve mixed results in this respect.

While its developers stated their intention to hold all US dollars in reserve to meet customer demand, it fell short of achieving this objective in 2017. It has also historically failed to deliver on its promise to make reserve account holdings transparent via the process of external audit, with this news causing USDT to reach its historic low price on November 24th, 2018.

What is a Stablecoin?

Tether was one of the first so-called 'stablecoins' to reach the crypto market, with the asset paving the way for similar tokens to be launched post-2014. In simple terms, a stablecoin represents a class of cryptocurrencies that attempts to offer price stability within the crypto space. To achieve this, they're typically backed by an established and stable reserve asset, with the USD offering the best example from the perspective of fiat currencies.

Beyond this, stablecoins can also be pegged to the price of predictable commodities such as gold, with this also providing a steady external value reference. This is vanishingly rare, however, with the greenback also supporting newer crypto assets, including Paxos Standard (PAX), TrueUSD (TUSD), and the USD Coin (USDC).

This type of token is referred to as a crypto-collateralized stablecoin. At the same time, it highlights the fully decentralized nature of cryptocurrency and the growing status of Ether and similar coins as safe-haven assets.

Why are stablecoins so stable

Regardless of their precise composition or the asset, they're pegged to, the key thing to bear in mind is that stablecoins largely achieve their price stability through collateralization.

This can also be achieved through the algorithmic mechanisms of buying and selling the reference assets or their derivatives, of course, with the dollar-pegged Basecoin asset using a consensus mechanism to increase or decrease the supply of tokens as required.

Top 5 things to know about Tether

What is Tether Wallet

Given that Tether was partially created to bridge the once-seismic gap between fiat and cryptocurrencies, it boasts significant compatibility with several different wallets and blockchains. More specifically, you can transfer and store USDT tokens with any wallet that supports the so-called 'Omni Layer,' representing an additional software dimension built on top of the trail-blazing Bitcoin blockchain.

Does the supply of Tether limited

Tether utilizes several blockchains to host the circulating supply on USDT, enabling users to bypass congestion and reduce transaction speeds in a specific chain. To this end, it also swaps and relocates USDT tokens from one blockchain to another, in some instances, keeping the number of coins in circulation the same in the process.

This happened recently, with Tether shifting $300 million USDT from the Tron (TRX) blockchain to the Ethereum alternative. While the reasons for this remain unclear, it's essential to remain informed at all times and select a compatible Tether wallet that's suitable for managing USDT tokens.

While you may choose to keep at least some of your USDT holding on live exchanges, it's wise to store some of your tokens in a secure and accessible wallet. Atomic Tether Wallet comes into play, as this currently supports more than 500 various crypto assets. Atomic has USDT support, this stablecoin can be bought, exchanged, and managed on the Atomic Tether Wallet platform, alongside any other tokens you may have in your portfolio.

Atomic Crypto Wallet also continues to seek new tokens and crypto assets to add to its platform, so you can continue to build out your portfolio while retaining your USDT holdings over time.

While you can't currently stake USDT tokens on Atomic Tether Wallet (this may also change at some point in the future), you can still earn rewards and cashback by participating in the platform's unique membership scheme. We'll have a little more on this below. Still, the initiative revolves around Atomic Wallet's native AWC token and essentially enables you to swap this asset with BNB on Binance Dex before exchanging it with another supported token.

In simple words, the USDT wallet is an encrypted wallet software.

The most comfortable way to hold your crypto is Tether USDT mobile wallet. You can simply install it on your mobile phone, write down the mnemonic seed phrase, and set a strong password. With these simple steps, your mobile wallet will be perfectly secured without paying anything in addition. Atomic mobile wallet is available for iOS and Android.

The available rewards for cashback in the Atomic Tether (USDT) wallet will vary depending on your membership level and the value of your AWC holdings, with cashback awarded monthly. Atomic USDT Wallet also fully supports Omni, Ethereum, and Tron blockchains, making it the ideal platform for seamlessly managing your Tether funds and similar ERC-20 coins.

Atomic Crypto Wallet is also uniquely secure. While it's technically a 'cold' wallet (which means that it can be accessed without the need for a live Internet connection), it's also available through both desktop and mobile devices. The latter point is extremely important, as having the capacity to securely manage and exchange Tether (USDT) tokens in real-time through a smartphone or tablet is a huge selling point in the digital age.

To this end, your own keys are stored directly on your designated devices as opposed to an online centralized exchange or server, which minimizes custody risks and the threat of your funds being hacked or manipulated by others. Until you keep your private key safe, it becomes a very hard deal to store your funds.

Atomic Wallet takes considerable steps to safeguard your USDT balance by combining 128-bit SSL encryption with stringent verification checks where required and offering you the autonomy to store your private keys (and seed phrase) safely and remotely. As we've already said, the latter negates the need to store sensitive private keys on a centralized exchange, making it less susceptible to hacking and malevolent scammers.

One of the most important options for those, who use crypto on daily basis, is to have a convenient mobile app to store crypto. Atomic Tether (USDT) Wallet is available for Android and iOS, so you can manage all your crypto on the go. With this app, you can Buy Tether with a fiat currency with a debit card, receive Tether, swap Tether USDT for other cryptocurrencies, trade Tether, and spend Tether crypto coins in any way you want.