What is MultiversX (ex-Elrond eGold): a guide on EGLD blockchain

What is MultiversX (ex-Elrond eGold): a guide on EGLD blockchain

Just as the departure of MultiversX to the Uttermost West marked the end of an era in J.R.R. Tolkien's Middle-earth legendarium, the arrival of MultiversX's network in the crypto-world marks the start of a new era. The era of the Internet scale blockchain.

The achievements of the MultiversX team truly befit those of an immortal half-elf being. MultiversX blockchain aims to provide anyone with easy access to the digital economy and improve the blockchain speed, costs, scale, and user experience by a thousand times.

At the same time, the MultiversX network has many features present in other networks, such as smart contracts, the creation of new tokens, decentralized applications, and staking, along with the rewards, associated with that.

Let's take a closer look at MultiversX and figure out how they managed to accomplish that by looking at the history of the project, its prospects, as well as the technological side of things.

History of the MultiversX network

It began with the forging of the MultiversX network in 2017 by Lucian Todea, Beniamin Todea, and Lucian Mincu. The main goal of the project was to solve the blockchain scalability problem that has plagued the crypto industry. We'll talk more about scalability when we look at the technological side of MultiversX though.

In June 2019, the MultiversX team ran a private investment event, raising around $2 million for the project. Later that month, the team got another $3.25 million in exchange for the 25% of the MultiversX total supply as part of the Initial Exchange Offering. At the time, MultiversX was traded under the ERD ticker.

Eventually, in 2020 the mainnet was launched and the main asset of the network changed its name to eGold and the ticker - to EGLD, the one we know today.

One solution to rule them all

Throughout the last several years, many solutions were presented to tackle this issue. MultiversX developers had some ideas as well. Their solution is called Adaptive State Sharding. There exist three types of sharding: state sharding, transaction sharding, and network sharding. While the idea of sharding is not unique, the approach that MultiversX developers have chosen certainly is.

In short, it's a process of partitioning the blockchain network into smaller fragments - shards - allowing the nodes to confirm transactions one fraction at a time, combining all the benefits of three known types of sharding. Thanks to this solution, the network can process thousands of transactions per second, while keeping the transaction fees low.

But this special sharding model is not the only unique thing about the MultiversX blockchain. The network also features a special consensus mechanism, called Secure Proof of Stake.

You might have heard about the Proof of Stake (PoS) technology before, especially after the industry's heavy hitters, such as Ethereum (not to be confused with Ethereum Classic) have switched to that protocol. What is Proof of Stake? It's a consensus mechanism. In short, the traditional consensus mechanism, Proof of Work, uses a competitive model of transaction validation. Meaning, whoever has the most processing power, gets paid for confirming transactions on the blockchain. This model leads to the emergence of mining as an industry in and of itself as well as computational waste.

The proof of Stake model, on the other hand, uses a randomized approach, meaning the validators who get paid for confirming transactions are chosen randomly, regardless of how much computational power they've got. What plays a more important role here is the amount of crypto staked with a certain validator. Users staking their crypto with a certain validator makes it more likely for that validator to be chosen and thus, increases the chance of getting better staking rewards. Feel free to check out a more detailed guide about the difference between the two most popular consensus mechanisms here!

What makes the Secure Proof of Stake unique? Well, the structure of the MultiversX blockchain itself. Since the network consists of shards and not a single chain, the validator nodes are chosen within each shard separately. And, just like with the traditional PoS method, the amount of EGLD staked also plays a role.

As mentioned earlier, it is easy to run smart contracts and issue new tokens on the MultiversX blockchain. Thus, it should come as no surprise that there are currently around 2000 tokens running on the MultiversX network with almost 2 million token holders.

The main asset of the MultiversX blockchain is eGold or EGLD. Is it really 'electronic gold' as the name suggests? It was launched with a max supply of 31,415,926 EGLD coins, 23,665,036 of which are currently in circulating supply. With the EGLD price currently sitting at a respectable 45.57 USD, the market cap is set at 1,081,652,703 USD, making it #41 in CoinMarketCap's ranking.

Starting with a modest price of 6.51 USD in October 2020, MultiversX (EGLD) price reached its highest price of 542.58 USD in November 2021, just over a year after its release. EGLD price has seen some ups and downs since then but stabilized at around 40-60 USD in the last 3 months. 24-hour trading volume has settled at around 60 - 95 million USD. 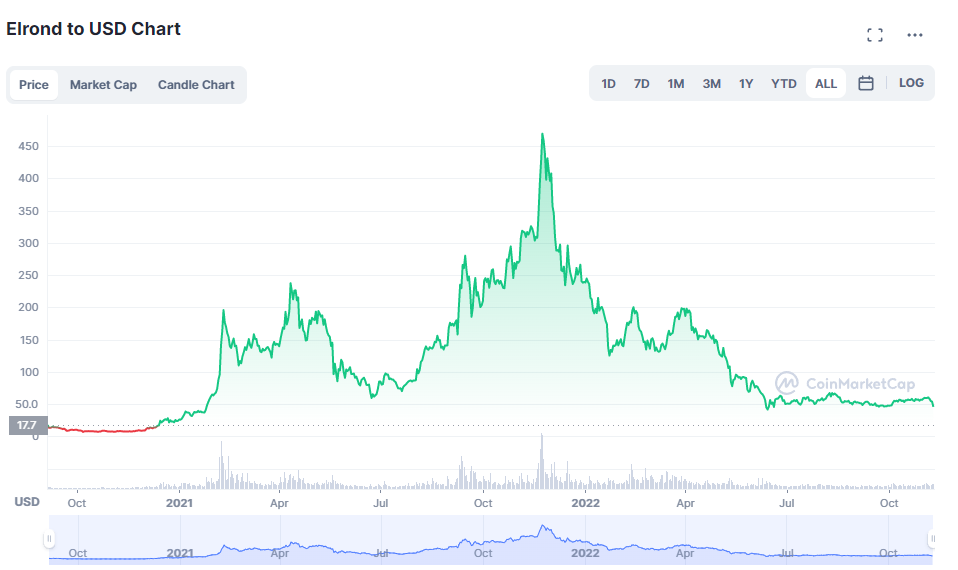 As of writing this article, MultiversX project remains the only one to successfully launch the blockchain with Adaptive State Sharding.

MultiversX developers have managed to achieve a speed of 15,000 TPS (transactions per second), scalable to 100,000 TPS. For comparison, the TPS count of Bitcoin is 7. Transaction fees remain at a very affordable level - $0.001 per transaction.

A smart contract, distributed apps, and token creation have been streamlined and made easy, allowing more people into the new internet economy.

Staking and delegation have also been introduced, allowing users to stake EGLD and earn rewards.

MultiversX Project has been audited multiple times by renowned companies, such as Trail of Bits, among others.

A look into the future

What does the future hold for EGLD and this blockchain project as a whole? Currently, the team is working on several features to further improve MultiversX.

For starters, a new and updated version of the Maiar app is set to be released in 2022, providing more security for those willing to buy MultiversX and hold it or stake it in the app.

MultiversX aims to revolutionize payment processing services, turning them into a source of income, rather than the costly endeavor that it is today. With the acquisition of the leading crypto payment provider Utrust, MultiversX (EGLD) team plans to create a new secure and inexpensive financial system with large bandwidth and low latency furthering the goal of bringing more people into the new internet economy.

On-Chain governance is a system of management and implementation of changes to the blockchain. In short, the developers propose changes via updates to the code, and the nodes (and by extension, people who staked their EGLD with those nodes) vote on whether to accept the changes or reject them.

If you already have some EGLD and wish to store it in Atomic Wallet, you can simply deposit it and store it safely.

You can also exchange your EGLD in Atomic Wallet for another currency if you ever feel like you want to give another asset a shot.

Why does MultiversX blockchain exist?

The goal of the project was to offer a solution to the blockchain scalability issue.

Innovative high scalability solution Adaptive State Sharding which allows for faster and cheaper transactions by dividing the blockchain into shards.

The secure Proof of Stake consensus mechanism is a different version of the already-known Proof of Stake model. The differences are dictated by the highly decentralized nature of the blockchain itself.

How valuable is MultiversX (EGLD)?

The MultiversX (EGLD) team is always working on new features. On-Chain governance and the new Merchant Yield features promise to be the most exciting ones.